Why have we given you this booklet?

You have most likely bought your cat or dog to the vets because they are feeling under the weather.

Are they listless, off their food, have a high temperature, struggling to pass water, have diarrhoea, showing signs of being in pain, have a bad cough or have noticeable swellings or sores on their body?

There are many reasons for all these ailments, but only one – an infection by bacteria, will respond to antibiotics.

Why are antibiotics so important?

Over the years, we have all become used to having antibiotics for a whole range of different illnesses, for ourselves and for our pets.  There is no question that the discovery of antibiotics has completely changed our medicine and the way we now live our lives.

The first antibiotic as we now know them, penicillin, was discovered by Sir Alexander Fleming in 1928. The importance of this discovery was quickly understood, and it went quickly went into commercial production. By the end of the World War 2, penicillin was successfully used to treat soldiers in the field and in hospitals.  It became known as “the wonder drug”.

Prior to penicillin, bacterial pneumonia was a dreaded disease and a third of patients would die from it. Post penicillin and the discovery of many new antibiotics, pneumonia represents a relatively mild disease affecting only 5 percent of those infected.

It’s true to say that the world would be a much harsher place without antibiotics.

So, what are we afraid of?

The recent Covid 19 pandemic has illustrated that microorganisms (in that case viruses, more on that later) can rapidly change to become more infectious  to get around the methods used to treat them.  Similarly, bacteria can quickly change to become stronger against the antibiotics we now use to treat infections caused by them. These are called super bugs.

Up to now, scientists have been successful in generating new antibiotics capable of treating more and more diseases.  However, it is becoming increasingly hard to find new ones, and bacteria keep changing to become resistant to those we have. Bacteria are winning the war, and super bugs are spreading fast!

Loosing effective antibiotics is recognised as one of the biggest risks to the planet. Many of the medical options that we now take for granted, will cease to be available to us. For example:

Why are we seeing more of super bugs?

Above we listed a range of reasons why you and your pet are at the vets right now. There are many different diseases that can result in these symptoms, but it is only the diseases that are caused by bacteria that can be treated by antibiotics.

Bacteria (germs) are often called microorganisms, because they are too small to be seen with the naked eye.  But there are many other types of microorganisms that cannot be treated with antibiotics. These are the viruses, protozoa and fungi.  As a pet owner, you will be aware of some of the infections caused by these other microorganisms.

Below is a table showing examples of common dog and cat diseases. Only those caused by bacteria (highlighted in yellow) can be treated by antibiotics. 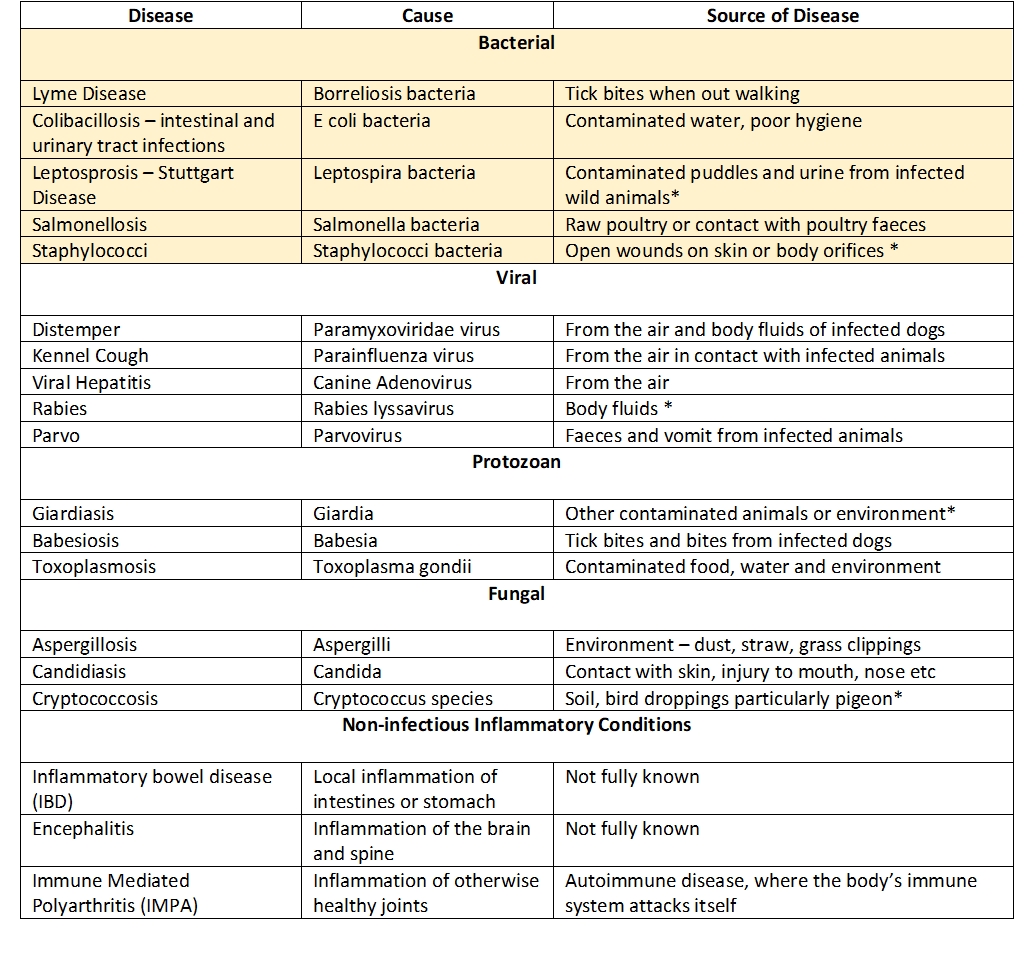 * Easily passed between pets and humans. Antibiotic resistant bacteria can pass between us and our furry friends – we are all at risk!

Many of the way these diseases appear in your pet are very similar, for example listlessness, off their food, high temperature, struggling to pass water, diarrhoea, signs of being in pain, a bad cough or have noticeable swellings or sores on their body. However, it is only the first group, the bacteria, that can be treated with and respond to antibiotics.

The problem arises because all these diseases (and many more) present in a very similar manner. Our vets and doctors are under considerable pressure to treat patients (furry and less furry) quickly. We have all become used to expecting a course of antibiotics for ourselves and our pets as a quick, first line treatment for illness, regardless of its cause. This is the problem. The more antibiotics prescribed, the greater the chance of bacteria developing resistance to them, resulting in the rise of more and more super bugs.

So, what’s the answer?

Scientists around the world agree that there are now far too many antibiotics in people, pets, farm animals and the environment.  All this is adding pressure for bacteria to develop resistance and become super bugs.

Most antibiotics are given without knowing if the patient will benefit from them. It has been shown that only 30% of antibiotics given to pets actually have a bacterial infection. The rest are given to animals with viruses, protozoa, fungal infections or non-infectious inflammatory conditions. That’s a lot of precious antibiotic sloshing around the world which will drive the rise of super bugs.

You can’t blame vets and doctors for this. Up until now, they’ve had to do something, and do it quickly. Their problem has been that it takes several days to clearly diagnose a bacterial infection. During this time, the patient could become critically ill and may not survive. Therefore, antibiotics have been a first line treatment for most diseases.

We now have a way of indicating if a cat or dog actually has a bacterial infection and will benefit from antibiotics. The test takes only 10 minutes, and your vet may be running this test as you read this booklet.

If the test indicates that it is likely a bacterial infection, your vet will prescribe antibiotics. If the test comes back negative, your vet will then need to run other tests to indicate the correct and most effective course of treatment.

Please listen to your vet’s advice and help save precious antibiotics to help protect our precious pets.

Thank you for taking the time to read this.